This past April was the warmest on record for Vancouver, and the growth at the park has been phenomenal. Roses, irises, lupines, milkweed, the rowan trees, and many other species were all in full bloom by the end of the month; and the butterflies are making their appearances. There were also a few days of light rain interspersed in the record high temperatures, and we were surprised by some of the largest Shaggy Mane (Coprinus comatus) mushrooms any of us had ever seen appearing out of the gravel right at the base of one of the cherry trees. 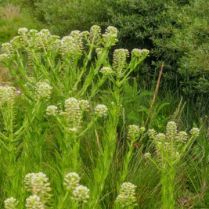 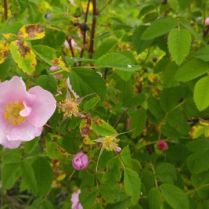 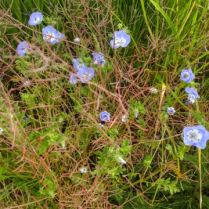 When the kids checked in with their Sit Spots, in addition to measuring their plants, we asked them to keep a ‘bloom list’, noting which flowers are coming into bloom, and which are fading out. The cherry trees are finishing up, and the lupines, irises and milkweed have buds coming out

We did a review of rope-making, as an introduction to weaving work. The kids started making rope out of the sedges and willow they had harvested in March. We gave them the assignment to make 10-14 pieces of rope as long as their arms, to be made into a net bag in May. We rolled out the big carpet and a large group of kids sat together and made rope, and the conversation flowed deeply.

Some kids very clearly preferred digging to rope-making; we capitalized on their enthusiasm and went out to pull some more of the invasive species they had noticed. 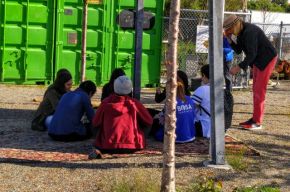 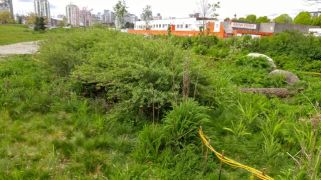 At their Sit Spots and their group Stewardship Circles, the kids noted the size of their plants and any new buds or blooms, as well as any germination of the seeds they planted in March. The rowan trees have blooms, as do some of the other tree species.

We introduced the kids to a simple kind of woven tray design called Catalonian tension-trays, which we learned from Catalonian artists Josep and Magda Mercader. Since willow is a more challenging material to work with than the grasses, sedges, lily, yucca and wool yarn they’ve used for rope and weaving in past projects, Sharon spoke to them about listening  to the materials to learn about the physical limits, to make bends and avoid snapping; and to note the shrinkage of materials as they dry out.

During work time, the kids worked on their tension trays, rope-making, or stewardship activities. 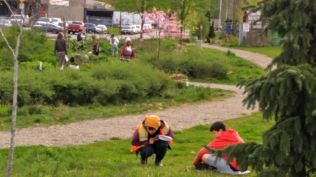 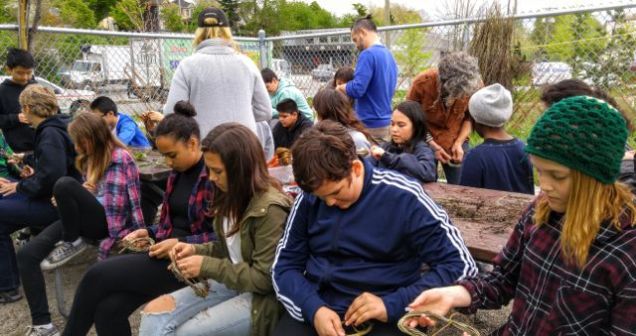 Exciting event today: releasing Mason Bees! The kids enjoyed taking the cocoons in their hands and letting the warmth cause the bees to emerge.

Afterwards, we reviewed growth patterns (explosion, branching, spiral, fractal) and the kids went out to their Sit Spots to count the blooms and run a special mission: to find specimens of a tall weedy plant with a four-petalled yellow flower and a spiralling growth pattern. They spotted three lupine blooms as well as 53 lupine buds; and four iris blooms. There were too many milkweed blossoms to count. The answer to the special mission was a kind of mustard growing wild and abundantly at the park, tentatively identified as American winter cress, Barbarea orthoceras.

The work activities including rope-making at the playground and in the compound; completing tension trays; and making new mason-bee houses out of bee balm stalks. Making mason-bee houses caused much grumbling, but it was done, and done mostly self-sufficiently. 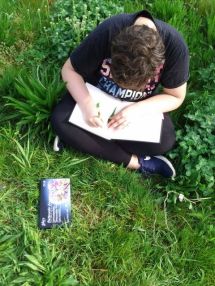 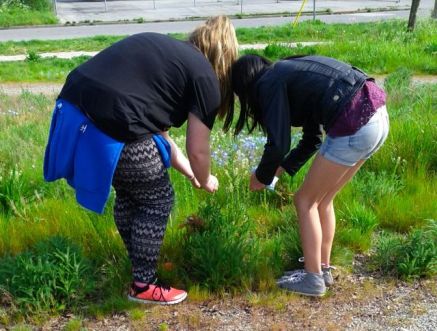 The kids continued with their Sit Spots and Bloom Counts. We reviewed our harvest word of thanks, Eslhalha7kw’hiwus, and the finger-test for strength, and harvested new grasses and weeds to experiment with for rope-making. The kids continued to work on making rope for their net bags. 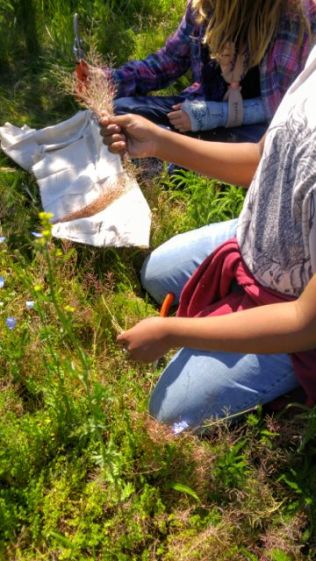 The kids spent 15 minutes at their Sit Spots. They talked about having been at the park recently and seen other kids playing a hide-and-seek game and running through the natural swales, ignoring the woven fences and trampling the lupines and other growth. One of them had lost the plant they had been measuring for growth to trampling — a hazard at an urban park. The lupines and irises are now so numerous that they are difficult to count accurately — it was estimated that there were between 100 and 150 lupine blooms in the eastern swale alone.

Back at the tables, we reviewed the twining technique we learned during our work with Tracy Williams in January. Some of the kids continued making rope; others laid out their ropes and used the grasses and other plants we had harvested on April 25 to lash and then twine around the ‘spokes’ of ropes to create the bases of our net bags. An extra pair of hands was helpful to hold the ropes in place as we got started. 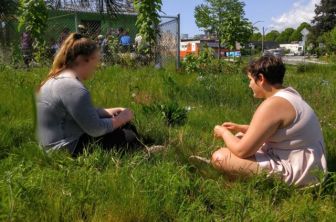